How do you convince potential backers sitting on the sidelines to 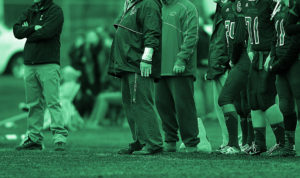 support you Kickstarter campaigns? In this first of a two-part session, Tyler delves into the psychology of the “sideliner” as well as the 4 secrets to getting them off the fence and into the backer column.

Today’s Session is brought to you by

Wow Tyler! I cannot convey how grateful I am to you and Comixlaunch, but I will try.
Earlier this year I was asked to be a part of an anthology. So, I started putting something together. Well, the anthology fell apart and I had a partial story. I usually draw other peoples projects, and that is great, but this was the first time I was going to do the whole thing myself. (although, I eventually had help with the colors.) Short story long, I stretched and added some stuff and had a comic of my own. Well now what?
I immediately thought of Kickstarter, but knew I had no audience. Oh sure I had drawn a couple books for other people, but no real following. Hell, I didn’t even know where to start. Thats when I found your podcast. I started at the beginning and listened to every episode while I worked on my pages for other people. I started to see the path. And any question I had, you’ve answered. Even now, I just launched and was trying to figure out how often I should update. -Bam- Tyler already sent you that info dummy. The books you recommended are great. I especially like Kickstarter for the independent creator by M. Holly-Rosing. I have opened that book at least once every day since I finished reading it and started to put my plan together. Your episode with her is what prompted me to buy it.
I am happy to report my book is over 80% funded in just over 24 hours. There is no doubt in my mind, I couldn’t have done that without you and ComixLaunch. No way.

ComixLaunch Mastery will be open for just a few more days.
The caliber of creators is exciting, and the projects they’ll be creating  are ones I’m excited to be a part of.  The community that we’re building between new creators and alumni is special.
What’s great is that creators in this community can work at their own paces.

Pilot version of the ComixLaunch Course – 4 creators launched projects within weeks of class wrapping up… but some of the creators needed more time.
Cody Stewart, working on The Slip, launching soon, getting his Kickstarter page going. Has access to all the ComixLaunch course materials and getting incredible feedback in the Private FB Group.
These are connections and a support system that’s ongoing… excited to be welcoming more creators into the family.

ComixLaunch.com/mastery to learn more and enroll.
Enrollment closes at Tuesday at Midnight EDT.

Four Secrets to Getting Potential Backers Off the Sidelines

Credit to Derek Halpern of SocialTriggers.com for this framework.
Derek’s specialty is intersection of marketing and psychology, two topics that many of you have spent not much time studying.
And in truth, I ignored those two topics for a long time, much to my own detriment.

In my day job I designed and produced a marketing simulation game for McGraw-Hill that’s been played by tens of thousands of college students and sold over a million dollars in sales.
In designing that game, had to be a bit of a crash course in marketing and become a mini-expert.
It was eye-opening. There were so many things I WASN’T doing as a creator.  And it really hit me in the last couple of years… our books were exceeding my ability to sell them.

Books were doing their job, marketing wasn’t. That’s on ME.
I needed to get better… for my Tribe. For my collaborators. And for creators like you who listen to me and have come to look to me for guidance on things.

So, SocialTriggers.com and Derek Halpern is one of many of the experts I’ve studied and learned from.

Boil the World into two Categories:

Your Reach – People exposed to your campaign –
On Kickstarter, will range from hundreds to millions.

Everyone Else – People Not exposed to your campaign
99.99999% of the population for most campaigns and creators. We’re going to ignore these folks today.

Your Reach – People Exposed to Your Campaign, will break down into three groups.

These are the people who have known about you for quite sometime, and they don’t need much convincing.
They know, like and trust you.
They’re already sold, and they just need something to buy.
These will be your day one backers.
They’ve bought from you in the past, or bought stuff like you’re offering in the past.
They’ve backed your previous campaigns.
The whole game is getting enough of these people into your Reach… with enough Take My Money Backers, success is never in doubt. Game over, you win every single time.

These are the people who will NEVER back your KS projects.
You could be the best salesperson in the world, and there’s nothing you can do to convince them to buy.
Maybe they don’t have the funds.
Maybe they’re just not interested in your product.
Maybe they’re a competitor watching you to research what you’re doing?
Maybe they only buy their comics at the direct market, or at comic shops.
Maybe they’ve been burned one too many times on KS.
Whatever the case, they’re not backing your project, no matter what you do.

The Final Group — Are what Halpern calls “The Sideliners.”

The sideliners are the people who could buy, should buy, but for whatever reason, haven’t made up their mind yet… they’re just sitting on the sidelines.
When talking about your REACH, the people who have come in contact with your KS page or campaign marketing in some form or another, “The Sideliners” are going to be the biggest group. Backers might be 1%. Non-Backers maybe 32%. The rest, 2/3rd of your reach are sideliners…
That’s it! You convert enough sideliners, you win! Your project gets funded, and after you deliver an exceptional campaign experience, fulfill your backers pledges on time, your “Take My Money Backers” count goes up so that you’re starting your next Kickstarter launch in a much better position.
As long as you understand the “psychology” behind why these people are sitting on the sidelines, any “tactic” you use to push them from the sidelines into the buying category can work.
Now I plan to show you more on “how” to do this later this week, but first, I want to help you better understand who these “Sideliners” are. In my experience, there are four types of people who sit on the sidelines. And they are:

How do you get the Sideliners off the sidelines?
That’s the hundred, thousand, or MILLION dollar question… all depends on the size of your reach.
To get them off the sideline, it’s important to understand the REASON they’re on the sideline in the first place. If you know that, and are clear on that, it becomes a whole lot easier to get them OFF the sideline and into the Backer column.

The Four Types of Sideliners

The Indifferent’s biggest barrier to buying is the fact that they’re thinking:
“Does this really matter to me?
Do I need it?”
Is this book for me?
Sometimes it’s true. Sometimes it isn’t.

The Skeptic’s biggest barrier to buying is the fact they’re thinking: “Who are you and why should I trust you?”
They don’t really know, like, or trust you yet… and they’ve probably been burned before.
These people probably discovered your KS organically… not from you or a trusted friend.
They’ve probably been burned before and are a little jaded on Kickstarter, either by the quality of the product or the quality of the campaigns.

The Worrier’s biggest barrier to buying is themselves.
Whereas the Skeptic questions you, the Worrier questions themselves.
Can I afford this?
Will I like this book?
Do I want to commit to backing this, and then dig a little deeper and realize I don’t want it and then have to pull my pledge, and then I’ll feel bad because I made them feel bad, so maybe I shouldn’t back at all… but what if I miss out on this, and it doesn’t fund, or it could have funded if I just…
Worriers… man. We all know one.

The procrastinator’s biggest barrier to buying is, as you might have guessed, procrastination.
This is something all human beings wrestle with, and it’s largely because we’re resistant to change.
Cart Open people.
Cart Close people.
And while they may want what you’re selling, spending money hurts, and they’ll delay experiencing that pain as long as possible.

So, those are the four types of Sideliners. Now if you want your Kickstarter campaign to be as successful as it could possibly be, given the reality of your reach, you have four objectives:

That’s the difference between doing a “small Kickstarter” that pulls in a small number of backers, maybe it gets funded, maybe it doesn’t…
…and a HUGE Kickstarter that exceeds your expectations and takes your career to the next level.

Write me! Leave a VM! Get on the show!
Invite to share results @ comixlaunch.com/voicemail or in an email [email protected]

There is the World
And there is your reach.

Within Your reach
Day One Take My money Backers
No Way Jose Non-Backers
Sideliners – All your time should be spent messaging sideliners.

In Part two, I’m going to give you a ton of ways to do just that.
Any special announcements
ComixLaunch Mastery – A couple days left…
ComixLaunch.com/mastery

Quote
“Best way of selling something: Don’t sell anything. Earn the awareness, respect, and trust of those who might buy.” – Rand Fishkin

That’s what I’m trying to do with this podcast, with the comics that we create, with the books I publish, and it’s what you should be doing too.